Not interested in buying a new TV? Then BenQ‘s new 4K HDR gaming projector, the X3000i, might be more to your liking.

The projector has a pair of HDMI 2.0b connectors and is compatible with most consoles like the PlayStation 4 and 5, the Xbox Series X, and the Nintendo Switch. This gaming projector has four LEDs with a peak brightness of 3000 lumens. 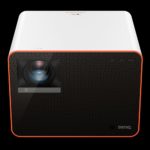 The X3000i supports either built-in speakers or an external source. The pair of five-watt internal speakers include Bongiovi DPS technology for virtual surround sound, but serious players are probably better off connecting a soundbar or surround sound system through the optical port.

At $1999 the X3000i isn’t cheap, but it’s an interesting option if you have the space and want a massive 150-inch display. BenQ expects the X3000i to have a 10-year lifespan; it also comes with a three-year warranty.