EDITOR’S NOTE — The Entire Staff of The Stand will be “out of the office” until Tuesday, March 1. Expect only light posting and no Daily News roundups during our absence, which we hope will make your hearts grow fonder. See you next Tuesday!

► From the union-busting Columbian — COVID-19 cases still on the increase at Larch Corrections Center — The state DOC reported Friday there are 97 active COVID-19 cases among incarcerated individuals. The number of active cases among staff — six — has remained the same since Monday. 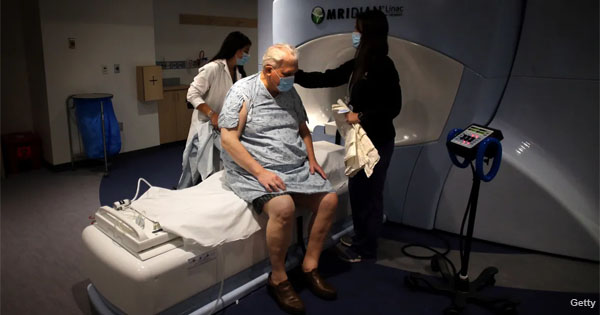 ► From Vox — The health system isn’t ready for an advanced cancer surge — Some fear that the delayed diagnoses of various cancers and other chronic, life-threatening illnesses — the result of COVID-19’s disruption to routine checkups and screenings — will be the next crisis that overwhelms the U.S. health system. “Our next surge will be advanced chronic disease,” said Steve Serrao, chief of gastroenterology at a hospital in Moreno Valley, Calif.. “That’s going to be the next surge of patients who overwhelm our system. I don’t think our systems are ready.”

► From NPR — More contagious version of omicron spreads in U.S., fueling worries — As the omicron surge continues to decline in the U.S., infectious disease experts are keeping a close eye on an even more contagious version of the variant that could once again foil the nation’s hopes of getting back to normal. The virus, known as BA.2, is a strain of the highly contagious omicron variant that appears to spread even more easily — about 30% more easily.

► From KUOW — Workers at Seattle Amazon Fresh store say they’ve formed a union — It would be the first union in one of Amazon’s collection of grocery stores, which includes Whole Foods, Amazon Fresh, and Amazon Go. Bullying by managers inspired Joseph Fink and others to form the union. “The managers at Amazon Fresh yell … they push and they push to the point of exhaustion,” he said. Fink says the company uses algorithms to track employee productivity at Amazon Fresh. Those algorithms have been blamed for tough working conditions at Amazon’s warehouses, too. It’s one reason people are trying to organize Amazon Warehouses in Bessemer, Alabama, and New York City. 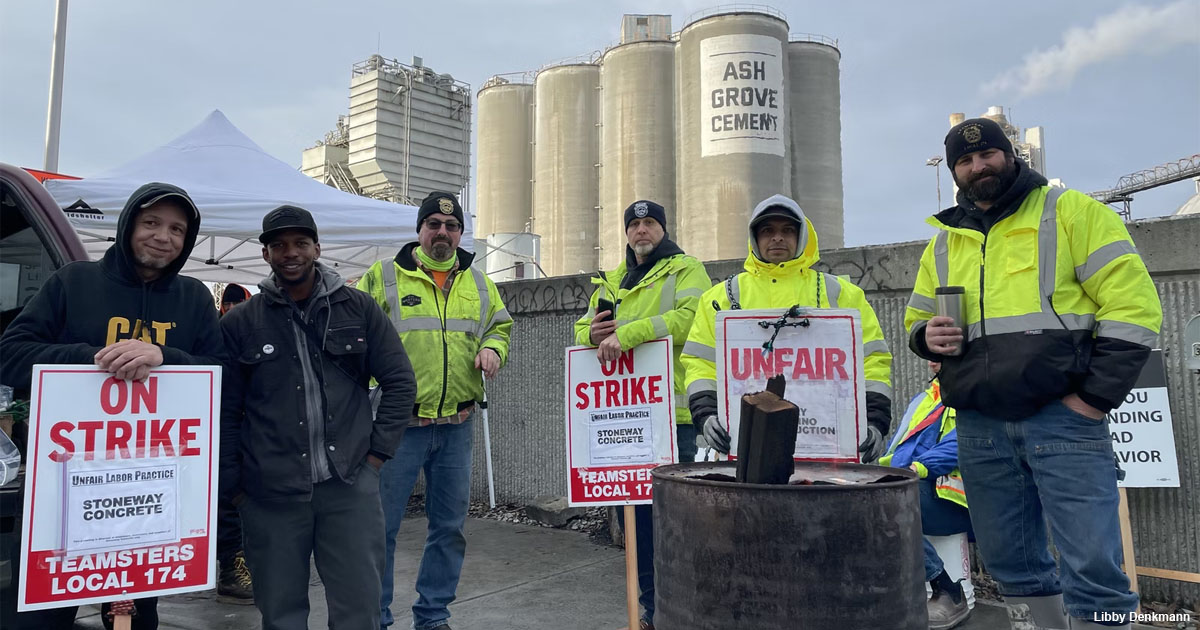 ► From Teamsters 174 — Concrete companies’ attempt to stop union picketing fails — The companies asked for Local 174’s members to be prohibited from physically being present at any time in the entrances or exits of the struck facilities, from coming within 6 feet of the companies’ or their customers’ vehicles, from making inappropriate verbal statements while at the picket line, from making threats, and an extensive laundry list of other activities which the companies claimed, without convincing evidence, that the union and its members have engaged in. The companies’ request for relief was mostly denied. The court did not find any basis to enjoin almost all of the things the companies were complaining about, and instead issued an even-handed injunction applicable to both parties, the union and the companies.

► From the Seattle Times — Judge limits Teamsters’ picketing after concrete companies go to court over strike — A King County judge will limit some Teamsters picketing activity after five concrete companies whose workers are on strike alleged union picketers created safety issues as they stood in the way of vehicles coming and going from concrete facilities around the region. King County Superior Court Commissioner Mark Hillman said he plans to impose “reasonable” restrictions on the picket lines.

► From the Bellingham Herald — With prices soaring, a power agreement could bring these 700 jobs back to Whatcom (subscriber exclusive) — There’s still the issue of a power contract, but if an agreement can be reached, a union official is expressing optimism that the former Intalco aluminum smelter near Ferndale could begin the restarting process as soon as June. The announcement last week that more than $10 million in funding remains in the state Senate supplemental budget is a key piece to getting the smelter restarted, said Larry Brown, president of the Washington State Labor Council, AFL-CIO. He noted that while $10 million is a significant amount of money, potential operator Blue Wolf Capital Partners LLC would be investing quite a bit more in the facility to make significant environmental improvements that would also be safer for workers. Brown said:

“To me, it’s a big damn deal. We have to do something when it comes to rural economic development and this (private/public partnership) is something we should be replicating across the state.”

► From the News Tribune — State agency alleges new and repeated safety violations at school bus company — A charter school bus company that operates in Pierce and Thurston counties has been hit with another formal complaint by state regulators. Staff for the Utilities and Transportation Commission filed the complaint on Thursday after finding “new and repeated safety violations” by Ohio-based First Student Inc., according to a news release.

► From the Seattle Times — More buses idled as supply chain issues hit Seattle-area transit — Buses in need of repair are piling up at King County Metro’s bases and the culprits are familiar ones: the supply chain and staffing shortages.

► From NPR — The first public option health plan in the U.S. struggles to gain traction — Washington state, in its second year of offering the nation’s first public-option health insurance plan, has learned an important lesson: If you want hospitals to participate, you’re probably going to have to force them. State legislators last year voted to mandate that hospitals contract with a public-option plan if public-option plans weren’t available in each county in 2022. That mandate will go into effect for 2023.

Jon and @owenslindsay1 talk about how corporate greed is driving the inflation crisis, and about the dirty, dirty deeds that go down in earnings calls. pic.twitter.com/wOaps6pxO9

► From Vox — Corporate pricing is boosting inflation — but we’re still buying — On recent earnings calls, massive corporations have posted huge profits and promised continued price increases, even as inflation continues to rise to rates not seen in decades. For example, Starbucks celebrated a 31 percent increase in profits at the end of 2021 — but it still plans to hike prices this year. Tyson Foods, the meat processing behemoth, raised its prices 19.6 percent overall, driving record stock prices for the company. Inflation, meanwhile, hit a four-decade high in January, with the consumer price index increasing 7.5 percent over the past year, before seasonal adjustment.

► From the Washington Post — A key to returning to normal is paid sick leave, Democrats say — As Omicron recedes and many restrictions are being lifted, and as more of the country begins to treat COVID as an unavoidable part of life, some Democratic lawmakers and others are trying to revive paid leave for COVID-related reasons. 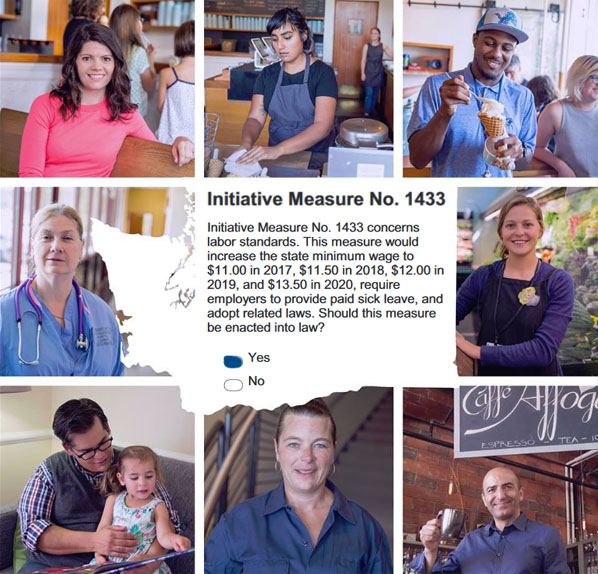 The Stand (Jan. 2, 2018) — Washington state gets raise, paid sick leave — Under the paid sick leave law, employees earn at least one hour of paid sick leave for every 40 hours worked. The law also requires employers to carry over up to 40 hours of an employee’s unused sick leave from one year to the next… Employees can file a complaint with L&I if they believe their employer is not complying with the new law. Businesses can face fines and have to provide back pay.

EDITOR’S NOTE — Feel free to thank a union member for this pro-worker standard in Washington state.

► From The Guardian — U.S. immigration courts struggle amid understaffing and backlog of cases — America’s immigration courts are struggling to function at the most basic level, with judges who are already woefully understaffed and often undertrained now overwhelmed by a growing backlog of more than 1.6m cases, industry leaders have warned.

► From the NY Times — Black farmers fear foreclosure as debt relief remains frozen — Lawsuits from white farmers have blocked $4 billion of pandemic aid that was allocated to Black farmers in the American Rescue Plan.

► From Roll Call — Minimum wage hikes will dent Pentagon budget — New federal rules issued by President Joe Biden requiring that federal employees and government contractors must earn at least $15 an hour could cost the Defense Department $880 million a year, according to estimates from the Pentagon and congressional budget experts. ► From Time — How Gen Z baristas are spreading the Starbucks unionization effort — This union organizing has a very different image than the picket lines and factory floors of previous generations. Many of the Starbucks organizers are in their 20s — the average age of a barista is 24 — and are tweeting their calls to unionize, running Zoom onboarding meetings for other would-be organizers, and holding organizing get togethers in their living rooms or at local bars.

EDITOR’S NOTE — Tired of being disrespected on the job? Whether you work at Starbucks or anywhere else, get more information about how you can join together with your co-workers and negotiate a fair return for your hard work. Or go ahead and contact a union organizer today!

► From the Washington Post — College faculty are fighting back against state bills on critical race theory — Appalled at efforts to limit what they can teach about race and other sensitive subjects, faculty leaders at prominent public universities around the country have rallied in recent weeks behind resolutions to reaffirm academic freedom and denounce legislation that would undermine it. 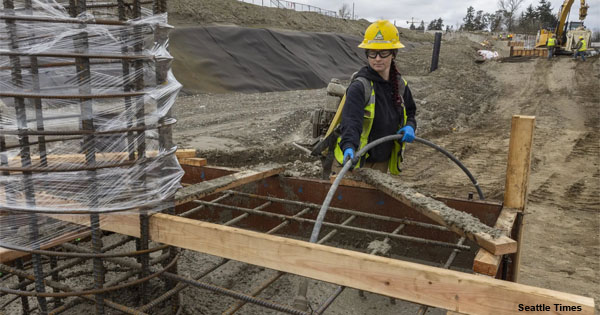 ► From the Seattle Times — Construction work has been the domain of white men, that could be changing (by Naomi Ishisaka) — Despite the pressing need for workers — Business Insider reported 2.2 million more construction workers will be needed over the next three years — there are still significant barriers for women and people of color to enter the industry. According to the Bureau of Labor Statistics, in 2021, nearly 88% of construction workers were men and 89% were white people, though white people make up only 60% of the population. But organizations like ANEW, a pre-apprenticeship program started in 1980 to diversify the trades through training and resources for participants. and others are chipping away at those barriers.

The Stand posts links to Washington state and national news of interest every weekday morning by 10 a.m.

Posted by admin on Feb 21 2022. Filed under DAILY LINKS. You can follow any responses to this entry through the RSS 2.0. Both comments and pings are currently closed.