A high point of the BC Lions’ 2021 campaign would turn out to be a major low one for Victor Gamboa. On the heels of an impressive training camp and working his way into a starting role in the secondary, Gamboa suffered a torn biceps tendon while making a tackle on a screen pass in the 45-13 dismantling of Ottawa on September 11th; a victory that improved the Lions to 3-2 in the truncated 2021 campaign. Just like that, his season was lost.

“I just felt the pop and already knew what it was,” Gamboa recalled from his offseason home in Tacoma, Washington.

“Sitting there on the bench after and hearing the doctors confirm it, I was still in disbelief. I was just like, ‘this is how the season ends?’ It was a shock, that’s for sure.”

Adversity is nothing new to the scrappy defensive back. He had to work his way onto the active roster in 2019 and would suit up in seven contests. With just nine total games under his belt since first signing with the Lions three years ago, Gamboa knows the pressure remains higher than ever to perform well in training camp. The good news? As he embarks on a full third season in the den, said pressure is a challenge he is tackling head-on.

“Exactly. I was talking to TJ Lee, our captain, and he was telling me that I’m not the ‘young’ guy anymore,” Gamboa explained.

“Established veterans like him and some of the newer guys coming in will always have the spotlight. We had some really good rookies last season and I was proud of what they were able to accomplish. But that also keeps me on my toes. It’s going to be a hell of a battle in Kamloops. I love it.”

KiAnte Hardin, Jalon-Edwards-Cooper and Austin Joyner were a few of the main examples of young athletes stepping into roles in the secondary. Gamboa can also credit his time at Eastern Washington University for helping mould him into the competitor he has become. 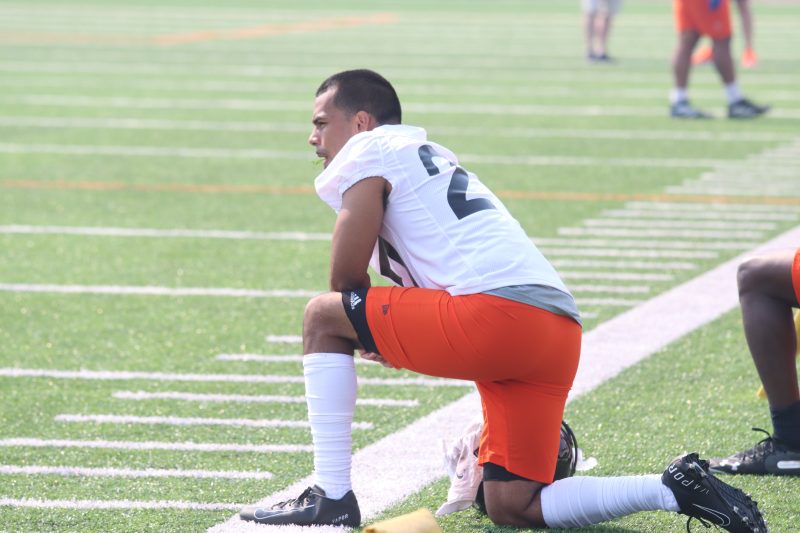 There is no shortage of outstanding players on both sides of the border that came through Eastern Washington University. Among those Gamboa suited up with are Montreal Alouettes quarterback Vernon Adams and Cooper Kupp, the outstanding Los Angeles Rams game-breaker who earned Super Bowl LIV honours less than two months ago. Battling Kupp and a few other future stars every day in practice is something that definitely helped prepare Gamboa for the big time.

“I was there for all four years he was. I remember the first day I went out and ran routes with him and Vernon Adams. Right away, he was the best receiver I had ever seen,” Gamboa said.

“I was like, ‘who is this dude?’ Being with him at practice every day taught me my weaknesses. It was guys like him, Kendrick Bourne and Shaq Hill, putting my talent against theirs, which was a great way to measure myself talent-wise.”

Like the CFL, Eastern Washington football is a brotherhood. Gamboa and Adams will be together just outside Seattle this week engaging in some off-season workouts. Never hurts to do a little advanced scouting either.

“It’s perfect because he’s one of those trash talkers. I can practice my trash talk back,” he says with a laugh.

“Knowing him for so long, we both know each other’s strengths. That’s a challenge to go up against someone who knows what you do. It forces you to change things up.”

The friendly rivals will only meet once this regular season on September 14th in Montreal. Should be plenty of trash-talking to go around.

Growing up in Parkland, a small community near Tacoma, Victor was always a family guy, taking great motivation from his mother Melanie Morgan. A single parent who raised Victor and his three children, Melanie worked for the Housing Authority and was later on the Pierce County School District board before getting elected as a Democratic to the House of Representatives four years ago. Before she made it big in politics, Melanie left a big impression on Victor and each of the kids.

“I’m still searching for that male role model in my life. I know that’s not exactly uncommon for many others,” Gamboa said.

“Seeing her fight, seeing how strong she is and her resilience has really fed into the football player I am today. Coming back from the injury or a season I felt was lacklustre and being able to stay positive, that’s who I get it from. My mom is always there.”

With veterans reporting to Kamloops in less than five weeks, Gamboa can hardly contain his excitement any longer. Let the secondary battles begin.

“I was up at the facility last week and just being around the guys and seeing the coaches gave me quite the adrenaline rush. It’s going to be fun these few weeks as we prepare to get going at full speed.”