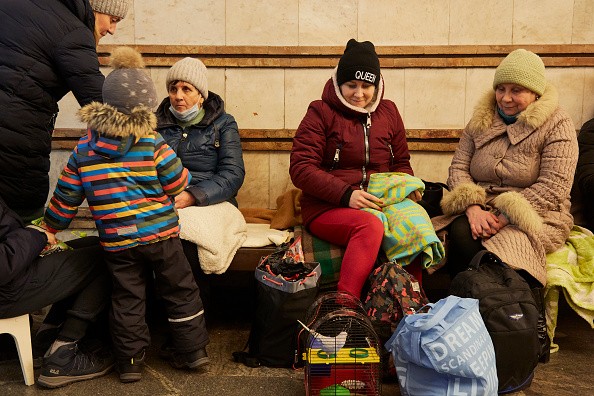 The people of Kyiv hunker down in subway stations ahead of another night of Russian attacks on the capital. Pierre Crom / GETTY

Just because the CDC is jumping off a bridge doesn’t mean Washington has to follow: Governor Jay Inslee remains “committed to his March 21 date for lifting COVID-19 mask restrictions” despite new CDC guidelines published today that change the metrics the agency uses to determine when communities can drop indoor masking and social distancing mandates, according to the Seattle Times. The CDC’s new standards would ultimately “allow 70 percent of Americans to stop wearing masks, practicing social distancing and avoiding crowded indoor spaces,” the New York Times reports.

In response to the CDC’s announcement, King County health chief Dr. Jeff Duchin said the county will go mask-off on March 21, along with the state.

Oh by the way, people with Omicron might be contagious up to nine days, according to a New York Times analysis of a new CDC study. The author “did not believe the agency’s isolation guidelines needed to change” as a result of the study, the Times reports.

Tacoma cops shot and killed a 31-year-old man last night: According to The News Tribune, cops said they responded to a report of a man with a gun at the Marriott Hotel, interviewed someone on the scene who saw the guy hold up a valet, traced him with a dog, found him, and then shot him after he didn’t show his hands. The cop or cops who shot him are on vacation while the Pierce County Force Investigation Team investigates.

Forgive this schadenfreude: I sold my car several years ago partly because the city’s stupid 72-hour-rule got it towed so often, so believe me when I say I hate towing………unless that towing is happening at a ski resort. Over the weekend, the Washington State Patrol said people illegally parked “nearly 100 cars” along the side of Highway 2 leading up to Stevens Pass, which prompted the cops to call the tow trucks, KIRO 7 reports. “According to troopers, people started sprinting down Highway 2 trying to reach their illegally parked cars before the tow trucks could get to them.” By the end of this blurb, I now side with the sprinters. Why not just tell the resort to make an announcement?

Chase went on the radio today: Watch him talk with Mike Davis and Joni Balter about items of concern in our fair city.

Truckers may get to use the bathroom after all: As I wrote in my bill roundup last week, a legislative committee adopted an industry-friendly amendment that used amorphous security concerns to let ports off the hook for providing enough bathrooms for truckers to use, rendering the bill useless. Ryan Johnson, the WA trucker who’s been fighting for this bill, fought back and seems to have won — at least for the moment. Yesterday a Senate committee stripped out the bad amendment and replaced it with one that would require ports to meet federal security guidelines on the issue, and those guidelines do not prohibit bathrooms or breastfeeding rooms in ports, Johnson said.

Okay but seriously: In a video address today Ukraine president Volodymyr Zelenski encouraged the country to keep fighting in the face of a third night of Russian attacks on the Kyiv, according to the BBC. “We cannot afford losing the capital,” he said.

Many continue to seek shelter in the city’s subways: Even this newborn baby.

A baby was born 2 hours ago in the #Kyiv subway, which is now being used as a bomb shelter pic.twitter.com/QgBrLvFHcW
— NEXTA (@nexta_tv) February 25, 2022

Surprising absolutely no one: Russia vetoed a UN resolution drafted by the United States to condemn the invasion of Ukraine. The United Arab Emirates, India, and China abstained from the vote, but so-called Western countries saw China’s abstention “as a win for showing Russia’s international isolation,” Al Jazeera reports.

The UN Refugee Agency estimates the war has produced 100,000 refugees so far, according to VICE, and it could produce up to four million. The United Nations Children’s Fund thinks the number could go as high as five million, with most people pouring into Poland.

Vehicles were backed up for 25 kilometers, many out of gas. Several were abandoned as their occupants fled west on foot as fast as possible. pic.twitter.com/XfTtR99AUH
— Ukraine Conflict Live 2022 (@UkraineLive2022) February 25, 2022

As Ukrainians send people to Poland, Poland and Latvia and the US and other NATO allies send weapons and ammo to Ukraine. But now Russia rules the skies, Politico reports, reducing all resupply efforts to “slow-moving convoys.” Hawkish reporters are demanding no-fly zones, but:

Do people think a no-fly zone is like a magic incantation that you utter and then planes can’t fly there anymore? Why is this question even being asked? https://t.co/yiYiT8Id6n
— derek davison (@dwdavison) February 25, 2022

U.S. sanctions continue to escalate: Now we’re joining Europe in an effort to freeze Putin’s assets, the Washington Post reports. Meanwhile, UK Prime Minister Boris Johnson is calling for NATO to push Russia out of SWIFT, a communication tool banks use to talk to each other. But that’s easy for BoJo to demand; Germany and Italy are the ones who use SWIFT to buy oil and gas from Russia.

The state of diplomatic talks: Not great. According to the New York Times, “Mr. Putin was prepared to send representatives to Belarus for talks with a Ukrainian delegation” after he had a word with Chinese General Secretary Xi Jinping, and after he’d heard Zelensky was basically ready to promise not to join NATO. But shortly after that Putin went on Russian TV and called Ukraine’s military “a band of drug addicts and neo-Nazis.” It’s not like there are no neo-Nazis fighting for Ukraine, but they don’t account for the whole army by any stretch, the war only empowers those assholes, and Zelensky’s Jewish anyway, so.

I leave you with the title track of the new Spoon record: That sax articulates the way I feel as the sun lays down to die after reading and writing so much about Ukraine.

P.S. This poem’s been going around lately. It’s worth hearing Ilya read it.